If you have been queen rearing using mininucs and you don't know what to do with them at the end of the season this article shows a brilliant way to put the bees to good use.
​

Guides to buying and selling nuclei

RECIPE-
Parts are by weight
3 parts of Soya bean flour
1 part Brewers yeast
I part powdered milk
(All above to be as fat free as possible).

METHOD
Mixed together with 1:1 syrup to act as a binding agent

FEEDING
Wrap in clingfilm or greaseproof paper
Make a few holes in the packet
Place directly over the frames or over the feed hole of a cover board
Feed these patties to colonies that you wish to build up. E.g. to encourage large numbers of foragers for the April oilseed rape flowers feed the bees these patties around mid February. Be sure the colony also has enough honey/nectar/syrup stores. 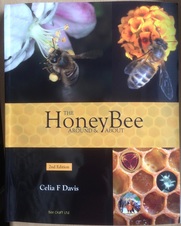 Celia Davis came to give us a talk on "Understanding the Youngsters". The talk was about larvae and pupae as you might guess.
Celia started by describing the structure of the egg and the remarkable change that happens in just 72 hours when the egg to becomes a larva. There is then an even more remarkable change during metamorphosis when the larva transforms into the adult worker.
Celia explained where brood food comes from and what the contents are for worker larvae and the queen larvae.
The mechanism of larval moulting and the feedback mechanism of the cuticle proprioceptors were explained to us. Brood pheromones are produced in the salivary glands of larvae and cover the cuticle. The balance of the esters (there was a list of 10 of them) changes as the larvae age. These pheromones cause a change in behaviour of the worker bees e.g. the formation of laying workers is suppressed while there is brood present even in a queenless colony.
The brood pheromone also acts as a kairomone -a chemical produced by an organism that has an effect on an organism of a different species. This is how the V. destructor mite is attracted to a larva just before capping.
Celia summarised as follows:
1. Larval development is complex.
2. Communication between larvae and bees is via brood pheromone.
3. Brood pheromone influences the behaviour and aging of the workers.
4. The brood pheromones also act as kairomones.

Celia is the author of two excellent books-The Honey Bee Around and About and The Honey Bee Inside Out. Both books are now available as second editions.
My Method of Swarm Control- David Chambers
​
David Chambers talked us through his method of swarm control. He hasn't lost a swarm for many, many years using this method.
His first advice was to clip and mark the queen.
Clipping doesn't prevent the bees from swarming but it does buy you some time and it may prevent the loss of the bees. If the bees leave the hive in an attempt swarm the queen cannot fly with them and the bees return to the hive a short while later- around 20 minutes or so.
When inspecting a hive it is a good idea to put the frame with the queen on it to one side in a nuc. She is then safe and easier to find if the need arises.
When queen cells are found at your weekly inspection take the following action:
1. Move the brood box to one side-3 feet away or so.
2. Put a new box on the old site with foundation (this will give a change of comb).
3. The queen on her frame goes in the new box. Check there are no Q cells on this frame.
4. The supers go back onto this box on the old site.
5. In the old box with the brood select one unsealed Q cell with a larva and remove the rest.
6. The box with brood may need feeding.

Nectar and Pollen Rich Plants for your Garden click here